Out with the old and in with the new! Just in time for Spring we have a fresh album from The Cowboys - now spread between their hometown of Bloomington, to Chicago, and Cincinnati. "Room of Clons", their fifth album, is possibly the group's most ambitious and diverse body of work to date. Those familiar with The Cowboys' previous output for Feel It - most notably 2019's "The Bottom of a Rotten Flower", will be well acquainted with the group's penchant for songwriting across the upper echelons of contemporary garage, punk, & powerpop. "Room of Clons" asserts itself as a varied hallmark of stylistic prowess, ranging from The Cowboys' trademarked Midwestern punk odes of previous work, all the way to a massive postpunk-leaning hit (yes, you're reading right) backed with a snarky pop number accented with kazoo that would surely please even Ray Davies himself. Further along, we're treated to several tracks with frontman Keith Harman taking the lead on piano, propelling his otherworldy vocals to the same towering clouds that Scott Walker and Emitt Rhodes occupied in '69 & '70. "Room of Clons" stretches even further, but never strays from attention, as The Cowboys delve into new, exciting, and largely uncharted territory - perhaps their most abstract work, but just as worthy as their now towering discography that never ceases to impress. 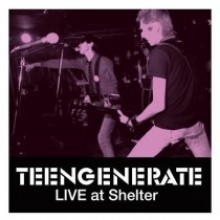 TEENGENERATE - Live At Shelter LP I'm going to guess that pretty much nobody reading this needs t..