Pressed on royal blue vinyl, shipping by May 25, 2018. Available in CANADA / USA on Mint Records. 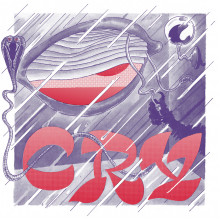