This is one we were looking forward to put out for a long long time... In 2010 they released their first single on the fabulous Pop'n'Roll Records in their home country, I just had to get it because of the great THE ROCKERS mock up sleeve artwork. When I listened to the two tracks on the single I had to sit down... they were even better than THE ROCKERS. Two perfectly manufactured Power Pop songs from another planet ... erh... decade! Early 2013 we  had the opportunity to  release their second single, "Hanging Up On You" back with "In my dream", and this was about the time I talked to Kei Sato, the singer and guitarist of THE CHOOSERS, for the first time about doing an full lenght album together... well, only more than SEVEN YEARS after you got it!!!! FINALLY!!!!

You surely know that Japan is crazy for Powerpop in any direction, they just LOVE it, the Bubblegum or 70ties blended, the rocking and rolling type, the kind of that make your hearts explode (sic!).... and of course there are hundreds of powerpop bands there - and MOST of them are actually pretty good, but few stand out, and THE CHOOSERS are definitely in the Top 3. 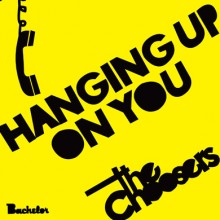 THE CHOOSERS - Hanging Up On You 7" They are from Japan, they love Powerpop and the know h..