The Italian hurdy-gurdy broke loose! SUSHICORNER is about in any town, could be near you. Raw fish get sliced and rolled and cut again. In "Konichiwow", two chefs taking rock and roll into pieces, and orchestrate it back together. Could end as a steroetype but this ain´t a california roll. Self-recorded in the coast caves of Sardegna, this turns out to a frenzy, lofi 60´s horror b-movie soundtrack. Matador farfisa waves got hit by casio drums loops, fuzzed guitar and pop hooks get subtitled by disguising, disgruntled theater accompaniment. As a forgotten, unstoppable primitive running sushi operated by a doomed japanese white-eyes school choir. Catchy bittersweet vocals, maybe the trade mark of one of our favorite italian rocknroll performers of today - Mr. Pilleri (THE RIPPERS, THE LOVE BOAT, THEE OOPS). This circus of weird from sad to evil is composed by Mr. Orru’ (UNDISCO KIDD) and him. We call it pop macabre majuscule! The overall loud volume levels wil shake your guts, Paranoid Zumba is played as a last dance which brings the madness to an end. Mastered and re-rolled by Emanuele Barrarto at BIG SNUFF Studios, Berlin. On ALIEN SNATCH! approved 180g vinyl, limited to 400 black vinyl copies and 60 in blood red vinyl for mail orders only. On tour with ALIEN SNATCH! recording artists LAME in Europe throughout April 2017, bring rice. 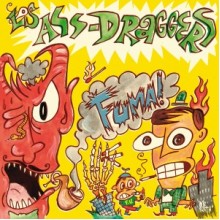