This 7” actually does not contain only two songs, its four!!!!! On the A-Side you get the normal album versions, I dunno when the album is gonna be out so consider this as a teaser. On the flipside there are alternate versions of these two songs.
Limited to 500 copies and surely a must have for the sophisticated connoisseur of lo-fi-ish kinda anti-folkish pop songs!
Armed with a new Kazoo sponsorship by Kazoobie Kazoos, the band is currently on their first ever euro tour and putting the finishing touches on their second full length album. 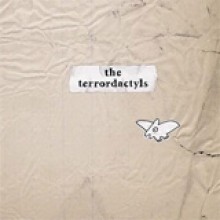 The Terrordactyls are Michael Cadiz and Tyrel Stendahl. Although Michael was born in Baltimore, MD a..