1977 Debut single by this band of school kids, with an average age of 16, from London that made the Sex Pistols look like old men.

An early three-chord punk double sider reissued here for the first time.“One night we'd be driven around London with the Clash gate crashing posh music biz parties, meeting our pop star heroes while discussing punk's relevance, taking speed and 'getting off' with girls, many (and in some cases many, many) years older than ourselves. The next morning we'd be back at school, throwing paper aeroplanes at teacher. It was a brilliant double life."

They formed in November 1976 with an average age of 16 from Finchley, London and named themselves from a T Rex line "Tyrannosaurus Rex - eater of cars".  They got much publicity from Dee Generate who was aged 14 joining the band to replace the original drummer. Eater supported the Damned at the Roxy and the Damned returned the favour by playing at Eater's school in Finchley where soft drinks were served !!  They played loud fast and exciting, performing a mixture of originals and covers (ie. speeded up variations of Velvet Underground songs...) for instance changing Alice Cooper's 'Eighteen' to 'Fifteen'. They were what it was all about; excitement and having a laugh. 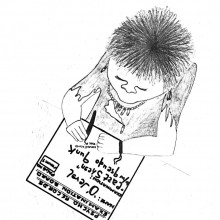