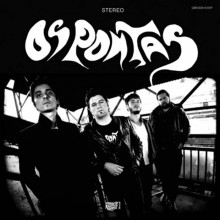 Groovie Records. Os Pontas represent the best of the instrumental Garage Soul made in Brazil thes..