Second album - even better than the first. Again these boys from down under deliver a shitload of fast-paced garage punk songs. 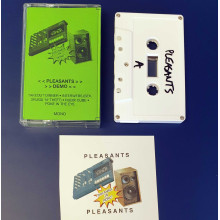