Blackout Records rediscovered 10 original studio tracks recorded between 1977 and 1982 by the original Washington DC punks! Strongly influenced by UK glam, US proto-punk and golden age hard rock, this is a true missing link between the best tradition of American rock’n’roll and the energy of British punk rock of those days!!! 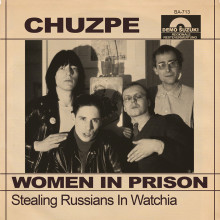 PRE ORDERRECORD OUT ON FRIDAY , MARCH 5TH 2021Women in Prison by CHUZPE..