Fantastic reissue of the second single of GLUEAMS, a swiss punk band, originally released in 1979. This is actually the second pressing if the reissue. Great replica artwork, plus a small sized zine.

“The bright shining beacon of Swiss punk has long seared its place in modest musical history like a toddler having a tantrum in an otherwise serene meadow. Glueams archaic and beautiful 2nd 7” gets thrown into the heaving abyss of 2020 care of Static Age Musik. Instead of hiding on comps and mixtapes, Glueams gets the full reissue treatment with an accompanying 6 panel foldout sleeve and a 8 page booklet detailing the bands history alongside archival photos and interviews, as well an unearthed bonus track. “Arsen” is under two minutes of punk bliss. a perfect fossil of cheap guitars, crushing drums, and the characteristic focused, glass shard vocals of this legendary band. A must have.” ( Jonah Falco ) 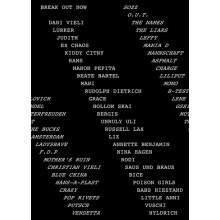