Ten years have passed since the release of this album and it has not lost its validity. Alegrías by Howe Gelb & A Band of Gypsies doesn't sound like anything you've heard before. While maintaining the Arizona desert flavor that Howe was working with over the years, his sound takes on new nuances as it merges with flamenco beats. On this album, Howe explores unknown territories halfway between American roots, southern and border rock, and the purest flamenco. As Howe said in many times while he was living in the desert, the only three tapes he listened to in his car were: Tom Waits, Miles Davis, and Tomatito. Many years later, an unexpected combination of chance and destiny transported him to the south of Spain, specifically to Córdoba. There, in the newly opened Eureka studios, he found the perfect atmosphere to launch his new project with a friend, Fernando Vacas. The echoes of Tomatito and the passion that Córdoba inspired in Howe Gelb are forces behind the album. Covered by musicians from Córdoba, among Raimundo Amador's regular collaborators such as Lin Cortés (flamenco guitar), Juan Panki (flamenco guitar), or Añil Fernández (cajon) and his classic double bass of Torgue Lund, the album began to take shape in the endless rehearsals. Gelb's voice instantly seduced the Andalusian musicians and after several meetings, the one from Tucson began to write the first lyrics of the album, inspired by the intensity of the sessions. As a culmination, the appearance of Raimundo Amador, who decided to join the project by contributing his virtuous and inimitable touch from which musicians such as Björk and BB King have already benefited. Proof of this is the ravishing intro to "Cowboy Boots On Cobble Stones", full of groan and feeling where he demonstrates his talent for improvisation. After the album was finished, the leader of Giant Sand suggested the collaboration of his friend John Parish, an English musician and producer, known for his work with PJ Harvey. Fernando Vacas accepted the challenge and traveled to Bristol to mix the songs with Parish. The chemistry continued to flow and the result is an album that preserves the flavor of the two traditions that it fuses, both southern roots from both sides of the Atlantic, while discovering a new and unique way of interpreting them. Gatefold sleeve. Includes download with bonus tracks.

LAST COPIES! On their first album cover they had a horse, this one is sporting a wooden duck.. 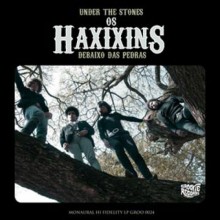